Please CAREFULLY READ the following information, and then click the “Book Now” button to make your appointment.

Please carefully read the following information, and follow the instructions below to make your appointment.

The Scientifically-Proven Healing Properties of Sound

The Integratron’s Landmark Nomination was approved in April of 2018 and is now listed on the National Register of Historic Places. Prepared and written by Daniel Paul, noted architectural historian, this document covers George Van Tassel’s role in UFOlogy and the design and build of the Integratron through its history.

The Proceedings of the College of Universal Wisdom 1953-1979

George Van Tassel published and distributed these newsletters from 1953 until his death in 1978. His widow published one more newsletter in 1979. The College of Universal Wisdom was dissolved shortly after George’s death. 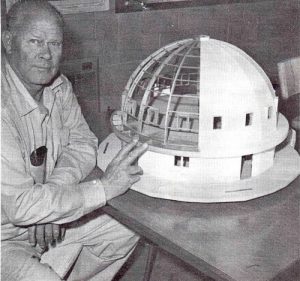 1910-1978
Author, inventor and controversial UFO advocate. Some agreed, some disagreed with his philosophy. None found him boring.

George Van Tassel, creator of the Integratron, was a legendary figure, an aeronautical engineer who worked for Lockheed, Douglas Aircraft and as a test pilot for Howard Hughes at Hughes Aviation. He was also one of the leaders in the UFO movement who held annual “Spacecraft Conventions” at Giant Rock for 25 years. Van Tassel said UFO contact and channelings and ideas from scientists such as Nikola Tesla led to the unique architecture of the Integratron. He spent 18 years constructing the building.

Van Tassel learned of Giant Rock from Frank Critzer, a prospector and desert dweller, who had excavated under the massive boulder to construct a dwelling of several small rooms protected from the fierce sun. Critzer had been killed in a explosion of the dynamite he kept stored in his rooms, the circumstances of which are still a mystery. The gutted rooms became storage for the Van Tassel family, but they slept outside the Rock and during the day tended the airport and their small cafe.

George Van Tassel began conducting weekly meditation sessions in 1953 in the rooms underneath Giant Rock which, he claimed, led to UFO contacts and finally to an actual encounter with extra-terrestrials when according to George, in August of that year, a saucer landed from the planet Venus, woke Van Tassel up and invited him onto the ship. There the aliens gave him a formula for a proprietary frequency for rejuvenating living cell tissues. In 1957 he began building a structure they called “The Integratron” to perform the rejuvenation. George described his creation this way, “The Integratron is a machine, a high-voltage electrostatic generator that would supply a broad range of frequencies to recharge the cell structure.”

His annual Spacecraft Conventions were attended by tens of thousands across two decades, featuring speakers that included high profile UFO contactees and pioneers in the fields of antigravity and primary energy research. Van Tassel led weekly meditations in the rooms under the rock from the 1950’s to the 1970’s, which he claimed led to UFO contacts.

The family hosted UFO conventions at Giant Rock (3 miles north of the Integratron) for almost 20 years to raise money for the Integratron project. In 1959, 11,000 people attended the spacecraft convention, and Van Tassel continued to work on the Integratron while writing a number of books on time travel and rejuvenation. Van Tassel died suddenly in 1978, after which the buildings at Giant Rock were vacated and gradually vandalized until the Bureau of Land Management found it necessary to bulldoze the remains.